On Xiaomi’s sales platform Youpin you will find a new, exciting product every day. This powerful battery-powered vacuum cleaner was again produced by a third party – and again by a different manufacturer than the previously known Roidmi, Jimmy or Deerma. Optically the Dreame V9 (similar to “Dream”) is very close to the previous Xiaomi vacuum cleaners. The Dreame V9 has the highest suction power of any battery-powered vacuum cleaner to date. We’ve tested whether it’s enough for the throne. 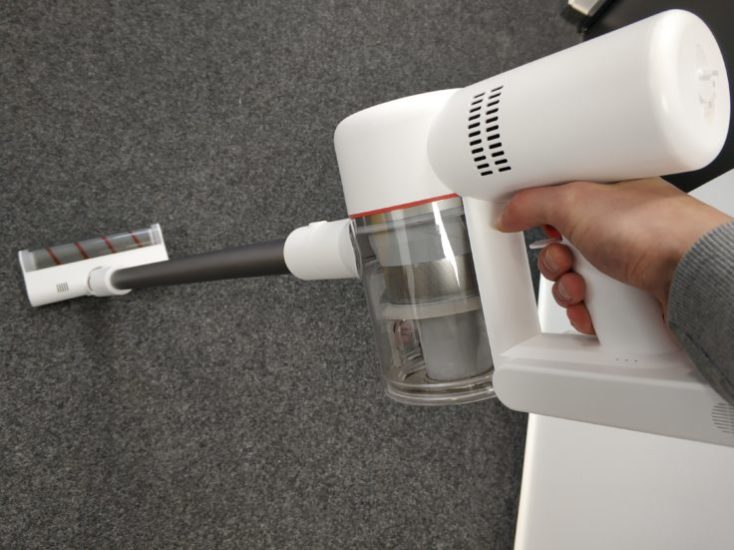 Xiaomi and its third party suppliers have already produced a number of products that can vacuum – and have convinced us in the tests so far. With a suction power as high as that of the newly emerged Dreame, it measures up directly to the company’s own top models.

The fundraising possible on Xiaomi’s Youpin sales platform, a crowdfunding-based financing system for the battery-powered vacuum cleaner, was a complete success. Within a few hours, the financing target had already been reached. This is not unusual for Xiaomi products, but it also shows the strong interest in the battery-powered vacuum cleaner. With a suction power of 20,000 pa, it finally puts a value on the scoreboard that no vacuum cleaner from China has reached so far.

Since we wanted to test the Dreame for you as soon as possible (there were a lot of questions from your side), we ordered the Chinese version directly for testing. We refer to it here. But there will also be an international version soon, which comes with an EU charging cable as well as an English manual. In the scope of supply you will find:

Also the packaging is quite chic, of course a bit bigger. If you want or have to, you can also simply transport the vacuum cleaner in the bus. Although it’s not necessarily usual to think of a battery-powered vacuum cleaner as a gift, the packaging definitely doesn’t put a spoke in the wheel when it comes to the idea.

Since the model is brand-new, a rather penetrating plastic smell could also be noticed. Apart from that, unpacking the V9 is really fun: The workmanship is again on a high level known from Xiaomi, the processed plastic is even more appealing than that of the Roidmi F8. Even a closer look reveals no manufacturing flaws, simply a mature model in terms of workmanship, which makes its handling even more fun.

The Dreame V9 is like almost all models nowadays a 2-in-1 model, i.e. the battery-powered vacuum cleaner can also be quickly converted into a hand-held vacuum cleaner.

Since these are two highly discussed topics around vacuum cleaners: The battery is fixed, so it can’t be replaced. Also a CE mark is not available, but this is probably also due to our China version and can change with the International version.

Three small LEDs on the handle indicate the current battery status. This allows you to see when the vacuum head with battery needs to be plugged in.

During the charging time of almost 4 hours, these LEDs can also be used to determine when the battery is fully charged. Fortunately, our Chinese version comes with an EU adapter, so you don’t have to buy one here.

68 dB are not a real house number, but they are quite loud. Telephoning undisturbed or watching TV at the same time? Difficult. This minus point is at the expense of the 20,000 pa high suction power. The V9 achieves 100,000 roations per minute, a value similar to that of the Dyson V10 Absolute. This comes to 125,000 rotations.

In contrast to other models, the Dreame V9 has three vacuum levels instead of two, which not only varies the suction power but also the working time. This is 60 minutes in energy-saving mode, 28 minutes in normal vacuum mode and 8 minutes in maximum vacuum mode. For the 2500 mAh battery, a cooling system for the battery has been installed so that it doesn’t give up so quickly.

As with the Roidmi F8, the Dreame gives you the feeling that you hardly have to do anything yourself during the vacuuming process – the V9 literally pulls its owner behind it. This really makes vacuuming fun and you don’t feel like you’re really working.

The only real flaw in the handling: The button on the handle with which you start the vacuuming process must be pressed continuously. Normally you press the button once to start (the battery-powered vacuum cleaner vacuums continuously) and once to stop. If I find it personally inconvenient, you can of course see it differently.

However, there is already a solution from the Chinese side. If you own a 3D printer, you can simply force your vacuum cleaner to vacuum continuously. Here in the video you can see how it works: 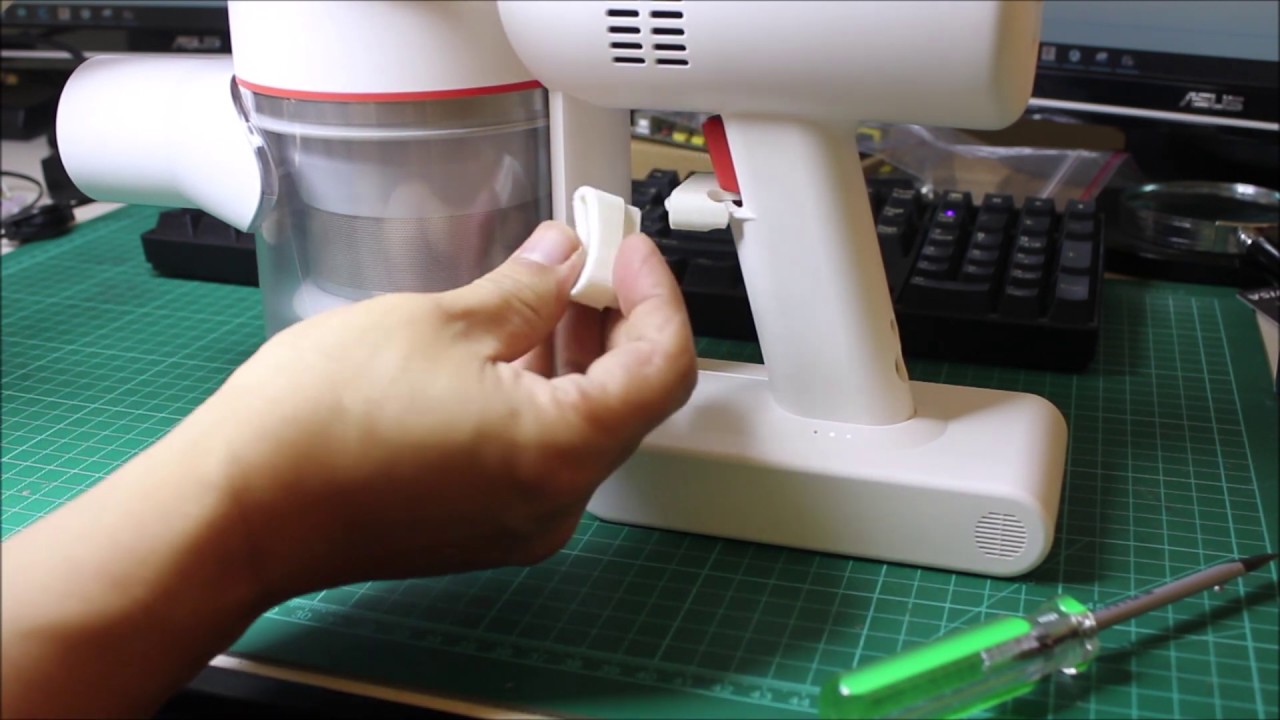 On hard floors as well as on carpets the V9 makes an appealing figure, you wouldn’t believe how much dust and dirt can be pulled out of such a carpet besides the lint. What is often a problem with battery-powered vacuum cleaners, the Dreame makes up for with its high suction power in combination with the floor roller.

The collected dirt and dust passes through up to five filters until it hits the HEPA filter. It can be washed out as usual. The 0.5 l dust chamber, which has to be emptied every now and then for more intensive cleaning, is of average size.

Fortunately, this works very easily and completely without direct contact with the contents of the chamber. Practical for allergy sufferers like me. The dust chamber cannot be removed from the handle, but is opened at the bottom and has to be emptied over the garbage can.

Attachments of the Dreame V9

The latest trend among the new vacuum cleaners from China? Mite control. Since I would like to spare you a lecture about house dust mites, interested parties can inform themselves about this topic in the articles about the Jimmy JV11 hand vacuum cleaner or JV51 battery-powered vacuum cleaner. Only this much: Mites are mainly found in bed or in textiles and are not good for allergy sufferers.

That’s why Dreame thought of it, since we include a mite attachment in the scope of delivery, as all manufacturers do in the meantime. This was announced with built-in UV light, which kills mites more effectively.

However, after a short inspection one has to realize that this was probably only a marketing gag. There are no corresponding lamps on the top of the mite that could emit UV light. Too bad. How well the mite top works is difficult to understand and certainly not after such a short test phase, so long-term experience will follow at this point.

The hand vacuum cleaner is generally very practical and in connection with the high suction power a real support in the household, if you want to vacuum something quickly. He also cut a fine figure in the car, but I didn’t realize beforehand that this had such an urgent need for cleaning.